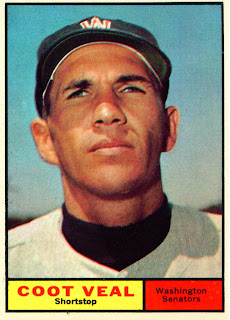 Coot Veal, who lends his name to one of the newest blogs out there, was snagged by the Los Angeles Angels in 1960. They took him from the Tigers on December 14th in the expansion draft and traded him to Washington the same day for Ken Aspromonte. Since Veal is shown on card number 432 of the 1961 Topps set we actually get to see him in a Senators' uniform.

Shortstop was a platoon position for the Senators in 1961 with Veal and Bob Johnson sharing duties there. As a result Coot played in just 69 games during the season. In those 69 games he logged 510 innings on defense - all at shortstop. He made just eight errors in 310 chances for a fielding percentage of .974. That was well above the league average of .955. Veal also had a better range factor than the league average.

Veal made 252 trips to the plate and posted a .202 batting average. His 19 walks helped bump his on-base percentage up to .273. A typical middle infielder of the time, Coot didn't have much power. He went the entire season without a home run or triple and managed just 10 doubles. His slugging percentage was a lowly .248. One interesting stat I found was that Coot stole just one base in 1961 while getting caught eight times. Not a good ratio and one wonders why Mickey Vernon kept running him.

Veal's offense wasn't pretty. It was better than some middle infielders of the day though and his defense was pretty decent. He was also 28 years old, getting a little on the older end for a shortstop. Perhaps that's why Washington sold him to Pittsburgh on November 21, 1961. After just one season the player with one of the top monikers in club history was no longer with the team.
Posted by Spiff at 5:37 PM