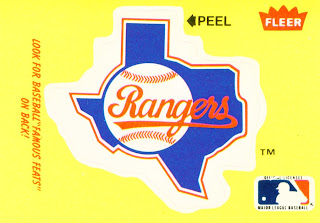 So, Night Owl has been listing all 30 Major League teams in order of his preference the past couple of years. I have long thought this was a pretty neat idea and decided to steal it from him.

1. Texas Rangers - Of course. Liked these guys when I was 5 years old. Still on board. Finally got to see them in a World Series so 2010 might have been the best season yet.
2. St. Louis Cardinals - Before he was a Rangers fan my Grandfather was a Cards fan. My Dad never made the switch. Of course he hasn't really followed them since the 60's either. I grew up hearing about Dizzy and Daffy Dean, Stan Musial, Bob Gibson, Lou Brock, Curt Flood, etc.
3. Kansas City Royals - Hey, I live in their territory. To make things even more appealing, in the past couple of years I met a fan. A real live Royals fan. I had no idea those existed. Mark knows the team and the players and makes it fun to talk about them.
4. Oakland A's - An A.L. West team this high up on the list? Almost completely as a tribute to my poor misguided brother. He has followed the A's since he was a kid through thick and thin. I have no idea what drew him to them.
5. Chicago White Sox - The 1919 Sox have always drawn my interest, Buck Weaver in particular. Throw in Louis Aparicio and Frank Thomas and the team is interesting.
6. Houston Astros - Gotta give the other Texas team a nod. Always did like Jeff Bagwell and Craig Biggio.
7. Baltimore Orioles - Teams that have moved appeal to me for some reason. The former St. Louis Browns do. Throw in Earl Weaver, Brooks Robinson, Cal Ripken Jr., and the fact that these guys are in the A.L. East and aren't the Yankees and it's all good. Anybody know if the O's claim George Sisler?
8. Los Angeles Dodgers - Have to side with Brooklyn when they were fighting the Yankees. Jackie Robinson, Sandy Koufax, Orel Hershiser, and Kirk Gibson add to the draw.
9. Pittsburg Pirates - Here as a forlorn hope.
10. Toronto Blue Jays - Because of my sister. I have no idea why she roots for this team. That and Joe Carter's home run in 1993.
11. Cleveland Indians - No idea why this team rates this high. I do like Bob Feller and Larry Doby though.
12. San Fransico Giants - I know, they should probably be lower what with the 2010 World Series and being the long-time home of Barry Bonds. Juan Marichal and Willie Mays pull them up though. They could still drop with Tim Lincecum however.
13. Washington Nationals - Come on guys, do something. Anything.
14. Colorado Rockies - Took them a long time to get postseason success but they didn't just buy it and then break the team up the next year. Besides, they usually make a late season run and that makes things interesting.
15. Boston Red Sox - Prior to 2004 this team rated higher. Seems like since then they have become the Yankees light. It's not all lost though.
16. Atlanta Braves - That was a bad call against them in 1991.
17. Arizona Diamondbacks - A pool? In a ballpark? Liked their early colors better as well.
18. Detroit Tigers - Nothing comes to mind other than Al Kaline and Norm Cash.

19. San Diego Padres - Nothing comes to mind other than Tony Gywnn.
20. Milwaukee Brewers - Nothing comes to mind at all.
21. Philadelphia Phillies - Trying to put together a dynasty. Need to get their fans to get it together.
22. Cincinnati Reds - They would probably rate higher if Pete Rose hadn't been the face of the franchise for so many years.
23. New York Mets - Their unsuccessful attempts to emulate the Yankees are amusing at times.
24. Chicago Cubs - Hapless. If it can go wrong it will.
25. Florida Marlins - Such a merry-go-round of players.
26. Tampa Bay Rays - Why the devil did they drop the Devil off their name? Makes no sense.
27. Minnesota Twins - That 1987 World Series still rankles me.
28. Seattle Mariners - Solely because they are in the A.L. West.
29. Angels - Perennial A.L. West powerhouse. If that's not enough, they can't decide which city they want to be from.

30. New York Yankees - Lots of history to like about this team. The arrogance of the modern players and the apathy of most of their fans towards any team not the Red Sox negates that though.

So there you have it. That's my list. There is the possibility that I could be persuaded to change a few of the rankings. Anyone want to speak up for their team? What's your list look like?
Posted by Spiff at 8:56 AM

The Giants need to be lower.

Cool list. I will be "homaging" Night Owl shortly myself.

One small correction though the Rockies made the postseason quicker than the Marlins and Rays. In 1995 they got the wild card in their 3rd year.

Understandable mistake as they didn't last long and it took another 12 years to get back. And still haven't won the division once.

I also plan a similar post and it's 100% because I enjoy what the Owl puts out. I'm waiting until all this March contest silliness is over on my blog. I may be biased, but I agree with your #1 team!

Thanks N.O. I figured you might have a beef with the Giants' ranking. They could be headed lower in the next few years.

Got the Rockies error fixed. Thanks for the correction. 1995 was the first year I didn't follow baseball because of the 1994 strike.

Thanks for the agreement on #1 PAP. Looking forward to reading your list.

I expected the Angels to be low on your list ;-)