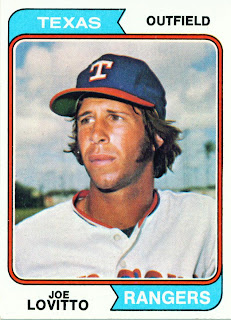 Joe played in 113 games for Texas in 1974. 106 of those games were in center field which effectively made him the first string center fielder. In 719 innings in center Lovitto made six errors in 213 chances for a fielding percentage of .978. That was well below the league average of .986. Not good for Joe.

At the plate Joe improved fairly significantly on his 1973 numbers. In 313 plate appearances he posted a .223 batting average and a .285 on-base percentage. Neither number is outstanding but both were a far cry from his dismal 1973 season. Joe also knocked in 26 RBI - a career high.

Lovitto was struggling to catch on in the Majors and to live up to his potential as a first round pick in 1969. He had performed well enough to get another chance in 1975. He would need to improve quickly though if he wanted to meet his goal of earning enough money as a ballplayer to roam the world.
Posted by Spiff at 5:12 PM

I'm still catching up on those "hookin' a blogger" up links from my contest. I don't remember Joe, but I did get a couple of his cards through the MCG site. He would fit in with Night Owl's dude likes a lady series in the '75 set.