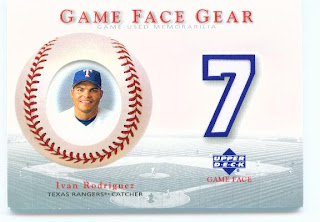 So today was Opening Day! Well, kind of. The Rangers don't open the season until tomorrow. Still, baseball was happening.

Ivan Rodriguez, shown here on his 2005 UD Game Face Gear card numbered GG-IR, and his Washington Nationals lost to the Braves 2-0. The Evil Empire beat the Tigers 6-3. The Reds stunned the Brewers with the season's first walk-off win 7-6. The Royals stumbled early as they lost to the Angels 4-2. The Padres beat the Cardinals in the first extra inning affair of the season 5-3. Right now the Dodgers and Giants are scoreless in the second inning.

Great thing to see those scores posting. Baseball is back and it's time to put on your game face.
Posted by Spiff at 7:36 PM

Yea, sort of is right...Let's get this show on the road! The Yankees win was offset by the Giants loss in my book, so I'm happy.