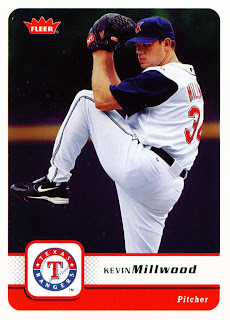 Guess I spoke too soon regarding Kevin Millwood's possible retirement. Today the Yankees announced that they had signed Kevin to a minor league contract. There is already speculation that he could be a part of the Evil Empire's starting rotation at some point during the season.

I have to admit, I am starting to wonder about the Yankees and their fixation with players who dominated in 2005. Sully over at Sully Baseball is the first place I heard about the theory but it sure seems to be holding up. In 2005 Millwood, shown here on card number 173 of the 2006 Fleer set, led the American League in ERA. Last season though he had a horrendous year and posted a 5.10 ERA and led the the league in losses with 16.

In spite of his signing with New York I do wish Kevin all the best. Hopefully he has a great season - just not against Texas.
Posted by Spiff at 6:47 PM

Just found your blog - great work. Would love to do a Rangers for Yanks trade at some point.

Regarding Millwood, it's a depth move. No harm in a minor league contract. Completely low risk. He'll stay in extended spring training or head to AAA and provide insurance if/when Colon or Garcia falters. None of these guys need to be great or pitch to their 2003 form (and no oen is expecting them to) - just eat 5-6 innings and keep them in the game, especially given the strength of the bullpen. Really, the Yanks are just looking to stay afloat until a better option is available in June or July, like Chris Carpenter if the Cards fall out of the NL Central race (just an example). It's not ideal at all, but it's not as big of a deal as it's being made out to be.

Thanks for the comment. Have a few Yankees in my commons box and quite a few listed on my trade list. You wanting a blond lot trade or specific cards?

I think what everyone (except NYY fans) is finding amusing is that the Yankees are reduced to the same level or below a lot of teams. The Rangers took a similar chance on Dave Bush and Brandon Webb but they aren't usually buying rings. That's probably what makes the Millwood signing noteworthy to most folks.