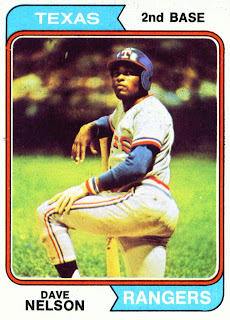 Tonight's game is a train wreck. Right now the Rangers are losing to the Angels 14-2. Ugly. Time for a break from the present.

Dave Nelson, seen here on card number 355 of the 1974 Topps set, was the first string second baseman for the Rangers in 1974. He would appear in 120 games and log 1042.1 innings in the field - all at second base. He would see 652 chances and commit 20 errors for a .969 fielding percentage. That was six points below the league average.

At the plate Dave would post a .236 batting average in 526 appearances. His on-base percentage was .291. That was in part due to the 34 walks he worked and the four times he was hit by a pitch. Nelson didn't lead the Rangers in any offensive categories but his 25 stolen bases were second only to Lenny Randle.

Nelson did have a rough time in the first half of the season. On May 10th in a game against the Royals he and Lenny Randle collided. Dave broke his nose, sprained an ankle, lacerated an eye, and suffered whiplash in his neck. Wouldn't be surprised if he also suffered a concussion. The result was that he was out until June 10th. After coming back his batting average slipped and he suffered from a variety of aches and pains but managed to play the rest of the season.

All in all it had been a tough season for Dave Nelson in 1974. The Rangers didn't appear to have a lot of options on the roster to challenge him at second base other than Lenny Randle. To stay ahead of Len he needed to try and get past the injuries and improve on his performance both at the plate and in the field.
Posted by Spiff at 9:42 PM