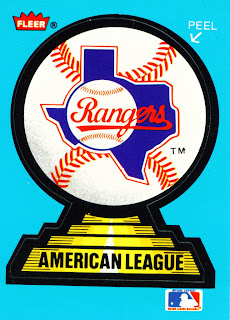 T.R. Sullivan is referring to the most recent rebuilding program and the most successful one to date. The architect was General Manager Jon Daniels. I don't have a card of Daniels though so you'll have to settle for this 1987 Fleer sticker card.

Daniels was the youngest GM ever when he was hired by owner Tom Hicks in 2005. J.D. immediately set off controversy by trading Alfonso Soriano to the Washington Nationals. That was just a taste of things to come.

Daniels strategy was to restock the farm system, let young talent develop, lock that talent in early, and to not trade the future away on a gamble for today. There were a lot of folks who grumbled. Following the trade of John Danks for Brandon McCarthy there were calls for Daniels' head.

Fortunately, Tom Hicks ignored the tumult and allowed the development of the team to run its course. Things really started to click with the trades of Mark "Money Man" Teixeira to Atlanta and Eric Gagne to Boston. With those two trades Daniels landed a large part of the core of the current Rangers team - the defending American League Champions.
Posted by Spiff at 12:05 PM