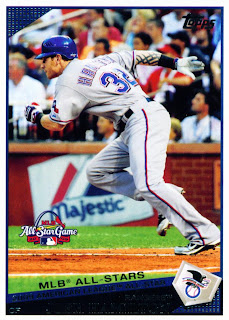 Well, C.J. Wilson had a rough day in Detroit. He just didn't seem to pitch as well as he had in his previous two outings. In 7.2 innings he allowed 4 earned runs but ended up with a no decision due to an offense that kept puttering along with just enough juice to stay in the game.

Darren O'Day had a rough day as well. He allowed two walks and two hits in the ninth inning. The result was a walk-off win for the Tigers after the offense had scored a run in the top of the ninth to even things up. That happens when your control deserts you and Darren definitely didn't have his today.

The roughest day probably belonged to Josh Hamilton. Josh, seen here on card number UH157 of the 2009 Topps Update set, tried to score on a pop-foul out when the Tigers left home uncovered. There was a close play and he dove in head first. Result - out and out. After getting tagged out Josh left the game with right shoulder pain. Latest word is a fracture and 6-8 weeks on the Disabled List. Bummer on the play, bummer on the injury. Here's to hoping it's only six weeks.
Posted by Spiff at 7:38 PM