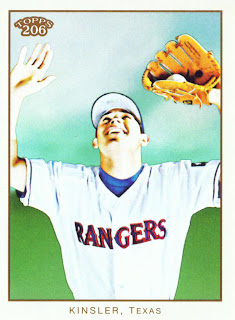 Got the yard work done and cleaned up in time for the start of the Rangers/Red Sox game tonight. Ian Kinsler, shown here on card number 282 of the 2009 Topps 206 set, led off for Texas in the bottom of the first. He hammered one deep. Before the final call I turned to Mrs. Spiff and told her that I couldn't believe it. A second later it was official - a lead off home run to start the game for the Rangers offense.

Last night a lead off homer against John Lester and tonight against John Lackey. Very impressive. Apparently it's the first time ever that a player has started the season with two consecutive lead off home runs. Congratulations Ian!

On top of the home run by Kinsler the Rangers proceeded to pound Lackey. They also roughed up the Boston bullpen as well. Final: 12-5 Rangers win. Nice to see the team off to a good start.
Posted by Spiff at 10:04 PM

Great start for the Rangers! I didn't realize Kinsler's feat was a ML first.