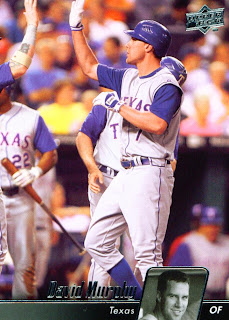 So the Rangers beat the Red Sox today 9-5. The game wasn't really as big a thumping as it looks like from the final score. In fact, it was tied 5-5 heading into the bottom of the eighth and I was thinking it would go extra frames. The Rangers had some other ideas though.

With one out in the bottom of the eighth Mike Napoli drew a walk. Yorvit Torrealba singled. Julio Borbon headed to the plate but was called back. In came David Murphy, shown here on card number 493 of the 2010 Upper Deck set. Murph hammered a two run double to give Texas the lead and they never looked back.

Of course Murph wasn't the only highlight. Ian Kinsler, Nelson Cruz, and Mike Napoli all homered off Sox ace John Lester. Elvis Andrus doubled Murphy in and Josh Hamilton sent Elvis home with a double of his own. Neftali Feliz struck out two to finish the game with a perfect inning. Arthur Rhodes also worked a scoreless frame in the seventh. C.J. Wilson struck out six batters in 5.2 innings while walking just two. Good ratio there.

Of course there were a couple of areas of concern. Two of the five Boston runs were unearned thanks to a first inning error by Julio Borbon. Julio had trouble with sloppy defense in Spring Training and it looks like he still hasn't gotten it sorted out. Better get it figured out Julio, Craig Gentry is at Triple A and still hungry. Darren Oliver didn't struggle as badly as David Bard did but he did give up a solo shot to David Ortiz to tie the game in the top of the eighth.

All in all a good game though. Very nice to hear the team back on the air. Even nicer when it's a win on Opening Day.
Posted by Spiff at 8:37 PM