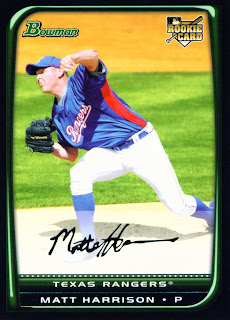 The Rangers first road game of the 2011 season got rained out yesterday. The result was a double-header today at Camden Yards.

Colby Lewis started game one. It didn't take long for the Orioles to jump on him and jump they did. Unfortunately the Texas offense wasn't jumping. In fact they seemed asleep. Final score: 5-0 Orioles to end the Rangers undefeated run.

The game two starter was Matt Harrison, shown here on card number BDP20 in the 2008 Bowman set. Harrison had an awesome outing in his first start of the season as he beat the Red Sox in Arlington. Going into today's game his ERA stood at 1.29 after seven innings.

In the second inning today Adam Jones jumped on a Matt Harrison pitch and jacked it into the bleachers. 1-0 Orioles. Here we go again I thought. I undersold Matt Harrison though. He shook off the homer and shut to the Baltimore bats down. Through seven he went without another run. In came the bullpen and kept it quiet (although Pedro Strop made things interesting in the 8th). Meanwhile the offense found their gas and got to running. By the time Harrison left the game he had a 9-1 lead. In the ninth Texas would add four more to seal the win with a 13-1 final score.

Bummer about the loss in game one but I was figuring that the team was about due for a loss. What is more concerning is Colby Lewis' performance. He struggled in his first start and then again today. That's not what anyone was expecting. Hopefully he can pull it together and get back on track. Nice to see Matt Harrison cruising to this point. He said this had to be his breakthrough season and he may be right.
Posted by Spiff at 8:56 PM