Wilson gets a W. 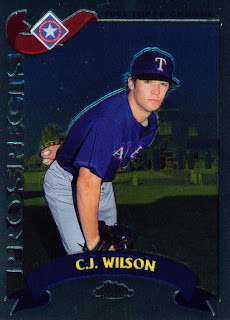 The Rangers went to 6-0 today against the Mariners after winning last night as well. C.J. Wilson, pictured here on card number T218 of the 2002 Topps Chrome set, got the win today. To get the win C.J. went seven innings and gave up just two earned runs. Seattle scored a third on an error. Wilson's pitching performance makes an interesting point about the season thus far.

In the Rangers first four games they pounded 13 home runs. They led baseball going into today's game in runs, extra base hits, and slugging percentage. That clearly puts them in the top of the league offensively. What tends to get overlooked is the pitching.

Going into the game today the Rangers starting rotation had a 3.28 ERA. That is the best in the American League for a starting rotation. Wilson's stands at 2.84 after today's start. That's in the middle of the rotation - Ogando and Harrison are lower while Lewis and Holland are higher. All five now have a win. All five are in the top 30 pitchers in the American League - that includes starters and relievers.

Those are some decent numbers. If the guys can hold onto them the season could be very enjoyable indeed. If you have good pitching you don't need home runs every game to win - just like the last two days for the Rangers.

Now to see if this performance translates to the road. Tomorrow is an off day and then the team heads into Baltimore to face the equally hot Orioles. Should be an interesting series.
Posted by Spiff at 4:24 PM