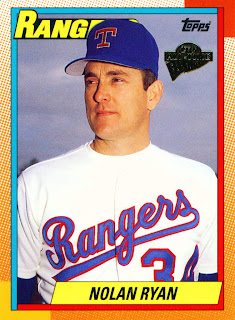 Number two on T.R. Sullivan's list of the top 50 decisions in the history of the Texas Rangers is the signing of Nolan Ryan.

On December 7, 1988 the Rangers signed Nolan Ryan as a free agent acquisition. That was over 22 years ago. The impact still remains. Ryan pitched more games for the Angels and Astros than he did for the Rangers but his five seasons in a Rangers uniform transformed the team.

At the time of the Ryan signing the Rangers were stuck in the doldrums. The competitive teams of the 1970's were long gone and the teams of the 1980's had been largely unimpressive. There had been a few players who caught national attention but overall the players were known mostly to die-hard fans.

Nolan changed all that. Suddenly there was a national spotlight on Arlington Stadium. Ryan put fans in the seats, money in the franchise, and the team on the map. Young fans who had been, or were in danger of being, lured away by the Cowboys suddenly sat up and took notice. The Ryan Express was moving and you had better get on board or you might miss something.

Nolan opened his time in Texas in 1989 by ringing up Rickey Henderson in August for strikeout number 5,000. In 1990 he would toss his sixth no-hitter and pick up his 300th career win. In 1991 he would get his seventh no-hitter. Those types of performances were historic. It seemed that the entire state held it's breath every time Ryan took the mound. Tickets to games he was pitching sold much better than other games.

Ryan retired in 1993 following a late season injury. In 1994 he was honored with a statue in the new ballpark. In 1996 the Rangers retired Nolan's number. He was also in the inaugural class of the Rangers Hall of Fame in 2003. In 1999 he became the first (and so far only) Hall-of-Famer to wear a Rangers cap on his plaque. In 2008 he was hired as the team president. In 2010 he became a part owner in the team.

Of course Ryan has impacted the team in the short time he has been in management and ownership. Even aside from that though, his signing impacted the team in a huge way. Nolan served as an ambassador for the Rangers and helped grow the fan base. The result was more funds to sign and retain other high profile players. The Rangers never reached the post-season with Ryan on the mound but a case can be made that his pitching helped put them there in 1996.
Posted by Spiff at 12:07 PM