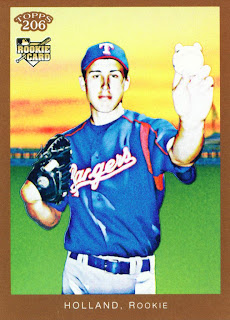 During Spring Training Nolan Ryan said that he expected at least 90 wins from the Rangers this year. After the first ten games of the season the club has gotten ten percent of the wins Nolan is looking for.

The most recent two wins came from the four and five starters in the rotation, Derek Holland and Alexi Ogando respectively. Both won low scoring pitcher's duels.

Yesterday Holland, seen here on card number 61 of the 2009 Topps 206 Bronze set, shut the Orioles down through six. The bullpen kept the lid on and the result was a 3-0 win. The six scoreless innings dropped Derek's ERA to 2.25 through 12 innings. They also gave him his second win of the season. Pretty impressive performance from the young lefty.

Apparently Alexi Ogando thought that one good turn deserved another. He went seven scoreless innings against the Tigers today to out-duel Justin Verlander. Texas ended up with the win 2-0. In 13 innings Alexi has picked up two wins and allowed no runs. That makes him the only pitcher in the American League with a least an inning pitched per team game who hasn't been scored on to this point. Great run so far.

Very nice to see these two guys doing well. Holland has been a prospect for several years and Ogando's entry into the United States was delayed when he got caught up in a visa scam. Right now it appears that both were worth the wait. Hopefully they can keep up the performance and help get the team the rest of the way to the goal that Ryan set for them.
Posted by Spiff at 7:41 PM