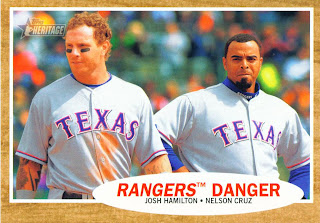 Wow! That's about all there is to it. For the Rangers it was a great Opening Day weekend. For me? Well, I made a trade with Rhubarb Runner over at é rayhahn, rayhahn. He came through with some great cards that I needed. One of the lot was this nice-looking card from the 2011 Topps Heritage set, number 263. Along with it he sent a few more 2011 Topps Heritage, some 2008 UD Documentary that I needed, a few Topps 1st Edition cards, and a couple of other cards that hit holes in my Rangers collection. Thanks Rhubarb!

As for the Rangers, all they did was come out of the gate like a ton of bricks. Three games later they have swept the Red Sox and are looking good. Nellie Cruz and Ian Kinsler are on pace for 162 homers each this season (I know, they'll slow down) and Matt Harrison wrote the preface to his case for making the All-Star game. Hard to believe that the season has started off this well.

In the first three games of the season every position player has made it onto the field and I think about every pitcher except Alexi Ogando and Derek Holland. There's been a couple of bumps but so far everybody's looking pretty good. Hopefully it keeps up tonight as the Mariners come into Arlington.

Seattle surprised Oakland in the opening series. Hopefully Texas can cool them down while staying hot themselves.
Posted by Spiff at 10:51 AM