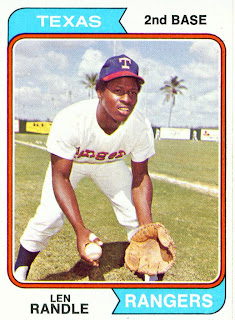 Ugly game tonight. Not really a contest after Matt Harrison cratered in the first inning. Don't really feel like writing about the 10-3 shellacking the Jays meted out so it's back to 1974.

Len Randle, seen here on card number 446 of the 1974 Topps set, was in his fourth Major League season in 1974. It would be his first full one. After splitting time in 1971 and '72, and only playing in ten games for Texas in 1973, he was finally on the roster for the entire season.

While facing challenges in the field, Lenny sparkled at the plate. He posted a .302 batting average in 573 plate appearances - good enough for second highest in the starting nine. His 26 stolen bases did lead the team. Randle also worked 29 walks in addition to his 157 hits for an on-base percentage of .338. He scored 65 runs for the team and bumped in 49. Lenny didn't have much power but he did knock 17 doubles and four triples during the season.

All in all Len Randle had a pretty decent season for the Rangers in 1974. He took advantage of his first full year in the Majors and impressed at least a few folks since he received some MVP consideration. Not too bad since the American League MVP was teammate Jeff Burroughs who cast a pretty long shadow. After the breakthrough season Randle just needed to keep up the good work to establish himself as a regular for Texas in 1975.
Posted by Spiff at 9:44 PM