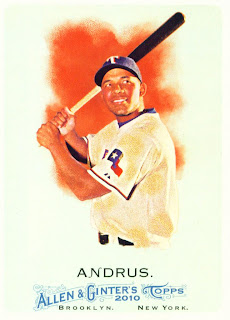 Well, the Rangers continued their early season romp last night with a win over the Mariners. That leaves them at 4-0 on the season.

Nellie Cruz kept his home run streak alive as he went yard for the fourth time in as many games. It was Elvis Andrus though who got the most exclamations. Andrus, seen here on card number 84 of the 2010 Allen and Ginter set, ended a streak of his own. He did it by homering in the first inning.

I was listening to the game and couldn't believe my ears when Elvis launched. Unlike Cruz, Andrus isn't exactly known for his power. In fact, some have been known to doubt if he had any power.

The streak that Elvis ended was his consecutive at-bats without a home run. Elvis last hit a long ball in September of 2009. He had gone for 705 at-bats since then without one. Long drought. Not the longest in club history though. Scott Fletcher went 914 at-bats between home runs in 1987-89. Interestingly, Fletcher was also a shortstop. Of course, I don't think his fielding was as good as Andrus' is.
Posted by Spiff at 7:23 PM