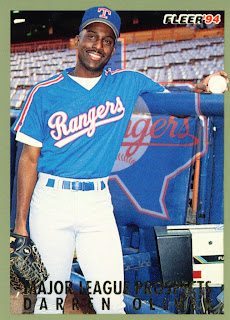 It's been a long day. Work seemed to drag on forever. The first two innings of the Rangers/Tigers game did as well. It took almost an hour to get that far in the game.

By the time I got off work the game was headed to the bottom of the ninth all tied up. As Darren Oliver, pictured here on his 1994 Fleer Major League Prospects card, took his warm-up tosses I began to get uneasy. This was too much like yesterday's game to suit me. Ollie got the first out and I tried to relax. I shouldn't have wasted my time. On the second batter of the half-inning he served up a gopher ball to end the game. Two days - two losses. Two losses - two walk-offs for the other team. Both walk-offs coming from the Darren duo.

Momma said there'd be days like this. Hopefully the losing is out of the system for awhile and the team can be on stride against the Yankees this weekend.
Posted by Spiff at 5:46 PM