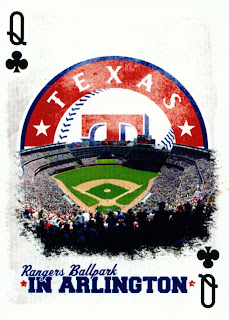 The Rangers got a new ballpark in 1994. Up until that time they had been playing in Arlington Stadium.

Arlington Stadium was a former minor league park that still felt and looked like one. For the first few years there was even an area that families could throw down a blanket and picnic during the games. By the early 1990's the stadium was really showing its age. The attempts to bring it up to major league standards hadn't worked. Something needed to be done. There were even a few dark rumors that the team might leave Arlington due to the stadium.

The Ballpark in Arlington was the result. The park was designed as a throwback park, along the lines of Camden Yards but with a Texas flair. Just before the start of the 1994 season the club held an open house. After Arlington Stadium the Ballpark was a whole new world. I can still remember walking through it with my Grandfather. From the relief carvings on the facade to the Texas stars in the ironwork I couldn't get enough. Surrounded by open spaces the park fits seems to be a baseball mecca - set aside for a special use.

While the finished product was pretty impressive there were some hiccups along the way. Disputes over the design of the park included a debate over building a dome. Fortunately that wasn't done and the open-air design prevailed.

Along with increased seating revenues the Ballpark in Arlington also helped the Rangers land their first All-Star game in 1995. Building the park was definitely the right move and worked out well. If you haven't been to a game there you really ought to give it a try.
Posted by Spiff at 12:05 PM

I got out of the Navy in February of '94. I had a fat bank account and went to about 25 home games that first season. You could get lower bowl seats anywhere around the dugouts or behind the plate for $16. It was awesome. I got some great autos, a few balls and lots of great memories. Now that I can take my boys there, it's even better.