See back for complete listing... 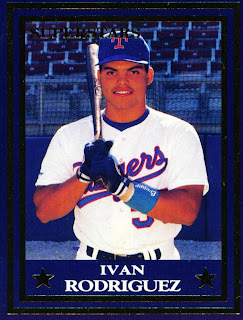 I was looking through one of my Rangers card books today and came across this 1992 card of Ivan Rodriguez. I can't remember where I got the card from other than it had to have been a few years ago when I was big into collecting Pudge.

Looking at the front of the card it appears to be just another early nineties unlicensed card. The border is blue with gold stripes. "Superstars" appears in gold lettering in the upper left of the picture. What really caught my eye was the back of the card.

When flipped over, the card shows copyrighted to Superstars in 1992. It is numbered 92-26. Nothing too odd there. The strange thing is that there are no stats and no write-up. No predictions or blurbs about how great Ivan was going to be. Not even a comic. What is on the back is a list. Titled "1991 Card Checklist" the list gives the card numbers for the major sets in 1991. For several sets there are no numbers, just a dash. Apparently that indicates that either the set did not have a card of Rodriguez included or the maker of this card was unaware of it.

I must say that I found the list of cards to be rather interesting. A small and apparently unlicensed set that includes a checklist of cards put out by the major card companies. Unusual to say the least.
Posted by Spiff at 9:04 PM