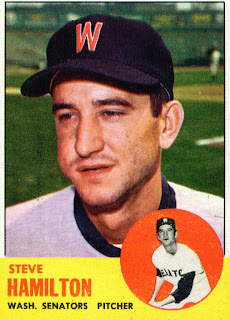 Steve Hamilton is shown here on card number 171 of the 1963 Topps set. In 1963 he played for the Senators slightly more than Bud Zipfel did.

Very slightly, two innings worth in three games to be exact. In those two innings of relief he faced 13 batters. Steve's ERA ran to an astronomical 13.50 and his WHIP came in at 3.500.

Hamilton was clearly not starting the season off on the right foot. That didn't seem to matter to the New York Yankees though. On April 21, 1963 they sent Jim Coates to Washington in exchange for Steve. In less than a year Steve Hamilton had arrived in Washington and left again.
Posted by Spiff at 6:25 PM