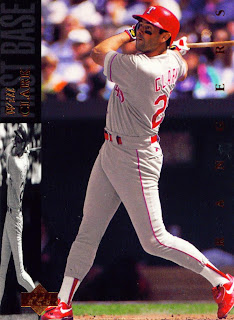 Number 17 on T.R. Sullivan's list of 50 Top Decisions in franchise history is the signing of Will Clark. Clark, shown here on card 350 of the 1994 Upper Deck set, was signed by Texas on November 22, 1993. He would stay with the team until being granted free agency in November of 1998.

T.R. says that Clark "single-handedly infused the Rangers with a team-first winning attitude." I'll have to think on that a bit but I do know that with Clark on the roster the team started winning and made their first two postseason appearances. Not sure if Clark was the only difference maker there but he was most assuredly a huge one.

Maybe Sullivan is on to something there though, Rafael Palmeiro played first base for Texas prior to and following Will the Thrill's tenure. With the exception of 1999 the team never did quite as well during those two stints as it did with Clark manning first.
Posted by Spiff at 8:48 PM

Will is my favorite player. Some people think he was a jerk, but he played hard all the time, no question. He expected everyone else to play hard too. I think he instilled a play hard attitude that Raffy just didn't have. I'm not saying Raffy didn't play hard, he just wasn't a leader in that regard. Of course I'm biased toward Will.