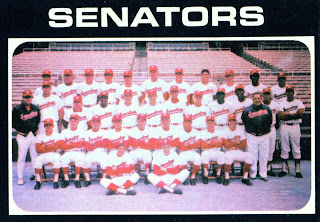 With just days left before the official commencement of the 2012 Spring Training we come to number 18 in T.R. Sullivan's Top 50 Decisions that have shaped the Rangers.

In 1968 the Senators were for sale. One partner had passed away and the other was looking to sell the team in the face of large financial losses.

The team ended up going to Bob Short for $9.4 million. He outbid a group headed up by Bob Hope. Unfortunately Short borrowed almost all of his funds. The result was a mad and unsuccessful scramble for funds to make the team pay off.

That scramble resulted in card number 462 of the 1971 Topps set being the last Senators team card issued as the team moved to Texas during the off-season. It also resulted in David Clyde being sent straight from high school to the Majors in an ill-advised publicity stunt. All in all the team clearly went to the wrong Bob.
Posted by Spiff at 4:39 PM

I just got back from another visit with David Clyde. He is an unbelievably nice guy.

Bob Short was an idiot. The best thing he ever did was move the team to Texas, but in all other respects he was a bozo. He owned the Lakers and moved them to LA before taking the Senators out of D.C. He ran for LtGov of MN in '66and lost and then ran for the US Senate in MN in 1978 and got only 35%, which is quite hard to do as a liberal Democrat in that state.