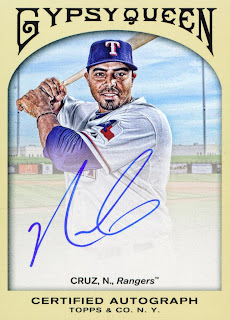 According to MLB.com the Rangers now have their arbitration-eligible players list down to one: Mike Napoli.

Nelson Cruz, shown here on 2011 Gypsy Queen card number GQA-NC, signed a two year deal today with Texas. That keeps him from becoming a free agent until after the 2013 season. The deal is worth about $16 million.

This seems like a no-brainer to me. Lock down one of your corner outfielders who also happens to be a real power threat and has decent speed on the base paths. One more piece of the American League Championship team that will stay in place.

Nellie is 30 years old but this deal isn't a ten year Albert Pujols deal. It's for two years and isn't too far off what Cruz might end up with if he went to arbitration both years.

Another concern is Cruz's health, specifically his legs. Seems like Nelson can't go a full season without some sort of hamstring problems. I foresee that continuing but it shouldn't get any worse in the next two years than what the club has already learned to deal with.

Good move by the front office. With Josh Hamilton's contract status on the rocks it will pay off to have Nellie for a year after Josh's potential departure. Never hurts to stagger the possible loss of veteran talent.
Posted by Spiff at 3:51 PM