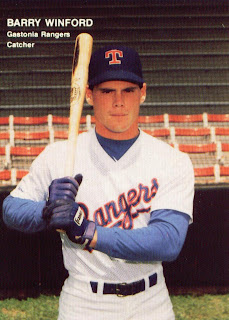 Well, Spring Training is officially under way. Good stuff. So far there have been no major waves coming our of Surprise, Arizona.

Barry Winford shows up on today's minor league post and on card number 187 of the 1990 Best set. The Rangers had gotten Barry in 1989 although I can't find any record as to how they got him. He played for the Butte Copper Kings that year and tore up Rookie ball. In 1990 he would be promoted to Single A and model his new Gastonia Rangers uniform for the Best photographer.

No matter how you look at it, 1990 was a rough season for Barry Winford. In 379 plate appearances he posted a .238 batting average. That was 121 points lower than the previous season. His on-base percentage also tumbled by 140 points to .324. The slugging percentage fall was even uglier - 189 points to .316. Additionally Barry walked the same number of times but struck out an additional 43 times.

Winford struggled behind the plate as well. In 89 games he committed 12 errors. That dropped his fielding percentage to .983 - an eight point drop from 1989.

Barry Winford did not make the transition to Single A ball well. That was clear. What was also clear was that he needed to catch fire and fast. Part of what threw his struggles into sharp contrast was the fact that a young Ivan Rodriguez had come through Gastonia just one season previous. Any catcher hoping to avoid being blocked by Pudge needed to make a big impression early on. So far Barry hadn't done that.
Posted by Spiff at 4:20 PM