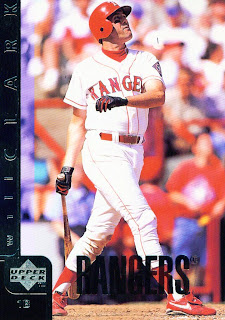 1998 was the only year Clark played for Texas that he didn't lose significant time to injuries. In 636 plate appearances he hit .305 with a .384 on-base percentage and a .507 slugging percentage. He scored 98 runs and bumped in 102 RBI while thumping 23 home runs and 41 doubles.

Those numbers helped spark the Rangers to their second division title in three years.
Posted by Spiff at 6:28 PM