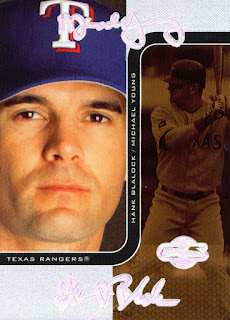 Well, some of you might remember about a year ago when I called Michael Young, shown here on card 93B of the 2006 Topps CoSigners set, on the carpet for his attitude concerning being a super utility man. At that point I was disappointed to see him whining and carrying on about how his feelings were hurt.

The move seemed to have worked out though. Young actually played in more games in 2011 than he did in 2010. He also raised his batting average, on-base percentage, and slugging percentage. That while leading the league in hits and getting above 200 in the season for the first time in four years. Good stuff.

Well, Mike's slated to be the super utility man for Texas again this season and once again he's talking to the media about it. Specifically MLB.com beat reporter T.R. Sullivan. This year though Young seems to be well aware of the importance of his role with the team and is embracing it. He says that he enjoyed the role last year and is looking forward to another season of it. Let me be among the first to say that this is a welcome change.

I am encouraged by Young's attitude. Much better start to the season than last year. True team leaders will have this attitude and will lead by example. One of the key roles on any ballclub is the utility man. Those players have to be among the most talented and versatile in the game. Young has this ability and it is good to see him use it. When you consider that the Rangers primary utility man is a player that made the All-Star game last year and that most teams would use to anchor their lineup the possibility of another postseason appearance seems reasonable.

Gotta love Mike. I hope he can retire as a Ranger. With a ring or two!