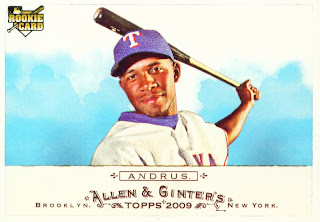 MLB.com is reporting that the Rangers have avoided arbitration with Elvis Andrus, seen here on card 89 of the 2009 Allen and Ginter set.

While the official announcement won't come until tomorrow, the word is that Texas has signed Andrus to a three year deal worth $14.5 million. That buys out the rest of his arbitration years and keeps him in a Rangers uniform through the 2014 season.

I have to say that I like the deal. Three more years of Elvis is ok by me. There are some who wince at Andrus' error totals but it pays to remember that his range is significantly higher than most other shortstops in the Majors. That means he makes (and sometimes fails to make) plays that other middle infielders wouldn't even try to make.

Elvis also provides some speed on the base paths as he has over 30 stolen bases in all three of his Major League seasons. Add to that the improved on-base percentage each year and he is increasingly becoming an offensive factor. There are those that take issue with his lack of home runs in 2010 but with the Rangers current lineup they need speed more than power right now.

All in all Elvis seems to be improving his game each year. Locking a 22-year-old up for three more years doesn't seem like a bad move to me. Especially when that youngster can turn a breathtaking double play, lay down a picture perfect bunt, and steal a base or two in the same game.
Posted by Spiff at 4:31 PM