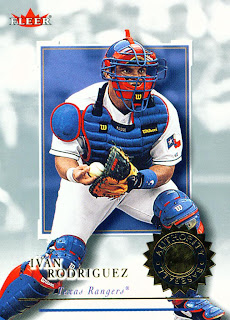 For the 12th straight off-season the Rangers will not be appearing at an arbitration hearing. Yesterday the team signed Mike Napoli to a one year deal. Since I have only one Mike Napoli card and am saving it for a future post, you will have to settle for another big name Ranger catcher - Ivan Rodriguez on card number 45 of the 2001 Fleer Authority set.

According to MLB.com, the deal with Nap is a one year deal and is worth about $9.4 million. That gets Texas one more year of Napoli fever and leaves just the pre-arbitration players left to sign. It also puts the Rangers over budget and with little flexibility heading into the season.

I like Mike and in a vacuum I could handle this deal. What bothers me a little is the inability to make a move mid-season should the situation dictate. Hopefully this will pay off and the budget will work out. The Angels are starting to get hungry after two seasons off in October and even the Mariners and A's are making a little noise. Not a good time to be caught short in a critical spot.
Posted by Spiff at 2:50 PM