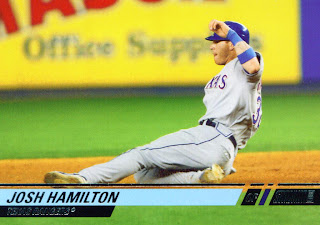 Well, Josh Hamilton had a news conference today to address rumors from the past couple of days that he had been seen drinking in a Dallas bar. What he said is that he did it, lied about it to Ian Kinsler, and regrets having failed to stay sober.

I've talked about Josh's failings in a previous post and have little to add to what I have already said on the matter. I am glad that at least this time there were no drugs involved.

As a fan I find this to be a bummer on a couple of fronts. It's always a downer to see a key player on your team fail, especially a comeback story like Hamilton.

From another aspect this incident is discouraging because it puts the contract talks on hold. That would be the talks that were supposed to result in a contract extension by Spring Training or be cut off. Looks to me like this will result in the latter. If that happens then Hamilton, shown here on card 53 from the 2008 Stadium Club set, will be a free agent next off season. I'm having a hard time seeing Texas re-signing him at that point. Seems like Josh may have stumbled his way out of being a Texas Ranger beyond the 2012 season.
Posted by Spiff at 4:12 PM