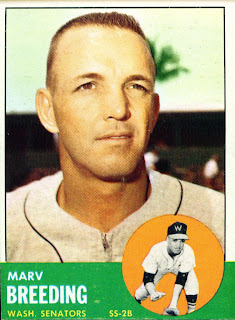 Marv Breeding was on the first leg of a round trip when he appeared on card number 149 of the 1963 Topps set. In December of 1962 the Orioles had sent Marv, Art Quirk, and Barry Shetrone to the Senators in exchange for Pete Burnside and Bob Johnson.

Breeding would start the 1963 season with Washington and would appear in 58 games while making 205 plate appearances. His batting average would tally to .274 and his on-base percentage to .299.

As the season wore on it became apparent that Marve Breeding was not the Senators' answer at third base. With an already crowded middle infield and the failure to nail down third he became expendable. On July 30, 1963 the Senators sent Marv to the Dodgers in exchange for Ed Roebuck. To complete Breeding's round trip the Orioles purchased him from the Dodgers on August 19, 1964.
Posted by Spiff at 11:45 AM