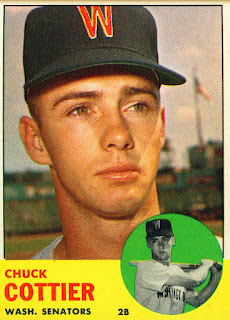 Chuck Cottier, shown here on card number 219 of the 1963 Topps set, was in his third season with Washington in 1963. He was also about as close as the Senators came to having a regular second baseman that year.

In spite of being the first-string second baseman, Chuck also put in 167.2 innings at shortstop and two innings at third over the course of the season. His real home was second though and he would man that post for 692 innings in the course of the campaign. Over those 692 innings Cottier made 14 errors for a total fielding percentage of .981. That put him about on par with the league average.

Chuck made 366 trips to the plate in 1963 and scraped together a .205 batting average. Even with his 24 walks his on-base percentage was only .257. He wasn't a power hitter either with only 14 doubles, four triples, and five home runs all season.

Chuck needed to work on his offense for the 1964 season. Don Blasingame was also a second baseman and had received limited work in 1963. His offense wasn't much to write home about but his average was about 50 points higher than Cottier's. If Chuck couldn't put some space between himself and the Mendoza Line he might well be looking for a job.
Posted by Spiff at 4:13 PM