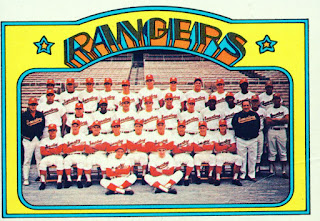 At 1305 this afternoon the Rangers will kick off the 2012 season. For the second time they will be leaving the starting gate as the defending American League Champions.

Still not the favorites for a lot of pundits. The Angels seem to have regained their status as the media darlings of the American League West. Nolan Ryan isn't buying though. He thinks the Angels have added a lot in the off-season and that the race will be tighter this year but still expects Texas to come out on top. No win total prediction as of yet from Nollie.

Today marks the beginning of the Rangers 40th year in Texas. As such, part of the opening ceremonies will feature some of the guys pictured on card 668 of the 1972 Topps set, the original team to take the field in Arlington Stadium. Kind of neat to see the milepost. Would have liked to have seen as big a hoopla for the 50th anniversary of the franchise last year but I'll take what I can get. Hopefully that is another A.L. West title and a deep run in October.

Just a quick note, with this being Easter weekend I will be unable to post due to family obligations. Tomorrow's and Monday's posts are scheduled though but they won't reflect the Rangers start to the season. Feel free to leave comments though. Hope everyone enjoys Opening/Easter weekend with their loved ones.
Posted by Spiff at 10:12 AM