End of the Pudge era. 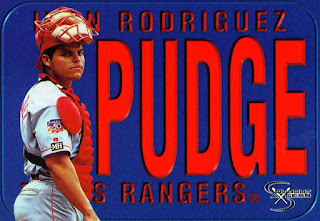 Well, I just finished watching the last part of Ivan Rodriguez's retirement press conference from the Ballpark in Arlington. Thanks to MLB.com I missed the first part.

So Pudge, seen here on card 140 of the 1998 Dugout Axcess set, is retired. Seems hard to believe. After all, it was just a few short years ago that my Grandfather and I were discussing this new kid that Texas had just called up in 1991. Reminded him of Jim Sundberg behind the plate, that's what Pop said. My Dad doubted. Sunny was good, very good. There was no way this kid could be that good. Then we saw him play.

He was that good. Every bit that good. Snap throws to first to catch a sleeping runner. Caught the great Rickey Henderson stealing by five feet. Pick offs on third. 13 Gold Gloves (10 as a Ranger). He was every bit that good behind the plate.

Ivan's glove was what got him noticed and kept him on the team. His bat came along later, after he had been in the Majors for two or three years. Then it came. Seven Silver Slugger awards (six as a Ranger). 311 career home runs. 572 career doubles.

Of course the steroids and performance-enhancing drug issues stained I-Rod with the rest of the ballplayers of his era. That caused pain and disappointment. Ivan's vague "Only God knows." answer to the obvious questions only caused more. That ended the player collection but not my firm belief that with or without any type of PED's, Pudge was something special.

14 All-Star games (10 as a Ranger) and the 1999 MVP award showed how special a lot of folks thought he was. My willingness to forgive baseball after 1994 showed how much I thought of him. More that any other player on the field at the time, Rodriguez pulled me back to the sport.

And now it's over. 21 years and 2,543 Major League games. Ivan Rodriguez is done crouching behind the plate and gunning runners down. Two questions yet remain. Will Pudge make the Hall of Fame? Will we see another catcher as good as he was any time soon?
Posted by Spiff at 3:40 PM

He's a first ballot Hall of Famer. He may not make it on the first ballot, but he deserves it.