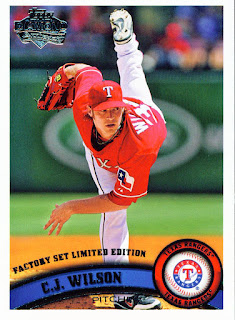 In 2010 Wilson made the move from the bullpen to a full-time starter role with the Rangers. There was some concern as to his ability to deliver in the new role but deliver he did. In 33 starts C.J. tossed 204 innings and compiled a 15-8 record. He also put up a 3.35 ERA and a 1.245 WHIP. He struck out 170 batters but also walked a league-leading 93.

As 2011 started off there was some talk that Wilson might tail off after his then career high number of inning pitched in 2010. No such occurrence. In a league best 34 starts in 2011 Wilson raised his total number of innings pitched to 223.1 and brought his win total up one for a 16-7 record. He lowered his ERA to 2.94 and his WHIP to 1.187. He also lowered his walks allowed to 74 and raised his strikeout total to 206.

Two pretty good performances from a guy who had not started a game since 2006. The fact that both occurred as the Rangers took their first and second pennants made them all the more memorable.
Posted by Spiff at 12:41 PM