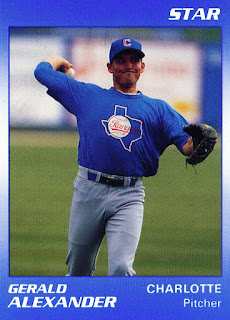 In the Rangers farm system of the late 1980's and early 1990's the Charlotte Rangers were an A+ level team. Gastonia, which has shown up in previous posts, was an A level team. Thus, Charlotte was only slightly higher in the level of play.

Today we start off a review of the 1990 Star Charlotte Rangers team set with card number 1, Gerald Alexander. Gerald was a 21st round draft pick for Texas in 1989. He played that year for the GCL Rangers and for Charlotte. In 1990 he would be back with Charlotte to start the season.

That performance got him a promotion to Triple A Oklahoma City where he appeared in 20 games for the Eighty-Niners. All 20 appearances were starts. That the level of competition had improved is clearly seen in Gerald's 4.10 ERA and 1.441 ERA. In spite of those numbers he still went 13-2 on the season of OKC.

At some point along the way Gerald even got a cup of coffee with the Rangers. That experience was an ugly one though as his ERA skyrocketed to 7.71 in the seven innings his pitched.

Clearly Gerald Alexander needed some more seasoning before making to Arlington on a permanent basis. He needed to make some adjustments at Triple A in order to replicate his success in the lower levels of the farm system. If he could do that then he would be able to take that final step to The Show.
Posted by Spiff at 12:27 PM