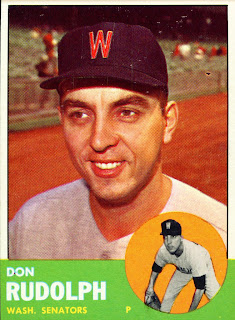 Is it just me or does Don Rudolph look a bit creepy on card 291 of the 1963 Topps set? I'm not sure if it's the lighting, background, or grin but something seems a bit off to me.

Something was definitely off with Don in 1963. After a serviceable performance in 1962 things seemed to really fall apart in 1963. Don was the second lefty in the Washington rotation behind Claude Osteen. Unfortunately he was nowhere close to Claude.

Rudolph made 37 appearances and 26 starts for the Senators in 1963. He won just seven games while losing 19. While some of those losses were undoubtedly due to poor support his 4.55 ERA surely had something to do with it as well.