First thumping of the season. 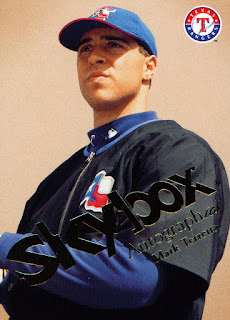 Mark Teixeira, shown here on 2004 Skybox Autographics #51, and the rest of the Yankees rolled into Arlington last night. There to greet them was a bewildered Derek Holland who pitched as though he had never beaten a t-ball team, much less the Yankees.

The bullpen did all right and the offense fought back late in the game but it was too little too late. Final score: 7-4 New York. Ugly game.

On the bright side it was the first ineffective start by a Rangers pitcher this season. That's not bad. Dutch just needs to bounce back his next time out and trust his stuff. No need to worry yet.
Posted by Spiff at 9:42 PM