I guess every wagon has one. 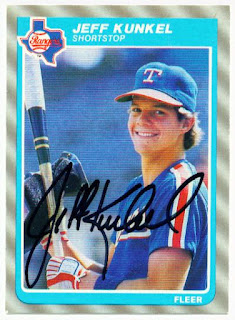 Great games the past couple of nights. Great to see Darvish getting better on Tuesday and the bullpen cobble together an effective performance last night. Even better to see the series win over the Yankees. Up to nine games over the Angels. Better keep climbing though, the Halos are sure to wake up at some point.

With the last two seasons and the torrid start the club has put together this season the bandwagon is growing. That's to be expected and appreciated. Not to say that it isn't amusing at times though. Just today I ran into a fair-weather fan 500 miles from Arlington.

Stopping by the local convenience store for a drink while at work I was hailed by the owner. "What do you think about our pitcher?" He asked. I stood there trying to figure who he meant. He is a big football fan and rarely has a kind word to say about baseball.

"Which pitcher?" Maybe he was talking about the Royals, after all they won yesterday and today. "The chinaman." Who??? I rolled through the KC roster in my mind. "Who?" Bruce Chen? "The one that beat the Yankees a couple of days ago." Yankees? Darvish. "He's not Chinese but he seems to be doing well. Still take some time to see." Wait a minute, our pitcher? "I thought they signed him out of China." China again? "No, Japan. I didn't know you were a Rangers fan."

"Big fan. Aren't Japan and China the same?" A big fan who doesn't know where Yu is from? "Really? How long? No they're not." Not realizing that Japan and China are two totally different countries? "Oh, I've been following them since the early eighties. I thought they spoke Chinese in both Japan and China." Perfect. "No they don't. Chinese in China and Japanese in Japan." Had to clear that up first. "So, who was Jeff Kunkel?"

Blank stare. He had no idea. Not on Kunkel, not on geography, not on the Rangers. I said goodbye, walked out, drove around the corner and laughed out loud.
Posted by Spiff at 9:11 PM

Reminds me of the time when I was a kid and my sister picked a Chinese restaurant to eat at and then got mad because she couldn't order a hamburger.