A tale of two veterans. 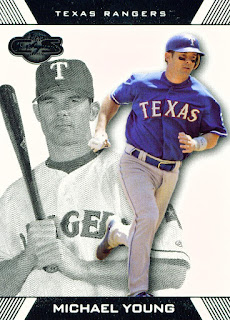 Michael Young, shown here on card number 45 of the 2007 Topps Co-Signers set, came through for the Rangers today in their 5-3 win over Seattle. Michael went 3-for-4 in the game with a run scored and four of the team's five RBI. One of his hits was a fifth inning home run that scored Ian Kinsler as well. Nice to see Young still being dependable and getting the big hits.

Not so dependable has been closer Joe Nathan. He owns both of the Rangers losses and a 9.00 ERA. That kind of thing happens when you give up four runs in four innings. When Texas signed Nathan I was wondering in the back of my mind if he would be able to return to his pre-injury form. Hopefully this is not a sign that he can't. Ron Washington says that he isn't worried about Joe. I am though. Not just panic-level worried but definitely concerned.

Fortunately Mike Adams and Alexi Ogando are in the bullpen as well and both seem to remember how to pitch. Neither has an ERA over two and both have thrown more innings than Nathan. Best scenario is Joe getting it together but it is comforting to know that he might not be the only option.
Posted by Spiff at 7:04 PM