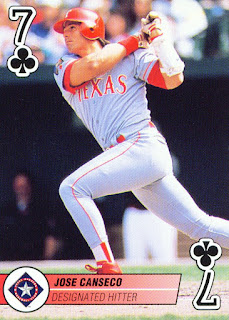 Got class today and church activities this evening so this is a pre-scheduled post. Will be back tomorrow.

Number 23 on T.R. Sullivan's Top 50 Decisions that shaped the Rangers is the 1992 trade for Jose Canseco. In return for Jose, shown here on his 1995 Baseball Aces playing card, the Rangers sent Ruben Sierra, Jeff Russell, and Bobby Witt to Oakland.

I have expressed my views on this trade in a previous post. T.R. says it makes the list because it put the Rangers at ground zero of baseball's performance-enhancing drug scandal. That's true. Lots of the guys who played with Canseco in Texas later appeared in his books and in the Mitchell Report. Not good stuff. Kind of makes the bone-headed plays and blowing one's arm out while pitching look like kid stuff.
Posted by Spiff at 12:03 PM