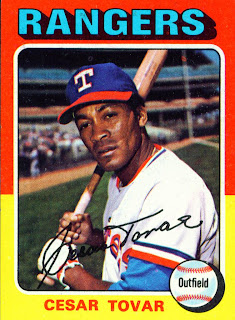 1975 was a fall off season for Tovar after his bounce back 1974 campaign. After seeing a lot of action in the outfield in 1974 he spent most of his time in 1975 as a designated hitter.

In 463 plate appearances Cesar tallied a .258 batting average and a .306 on-base percentage. Both of those were significant drops from the previous season. His power remained about the same though as he hit 16 doubles and three home runs. He also stole 16 bases but got caught 11 times.

In spite of being primarily a DH, Tovar did see some action in the field. He would play in all three outfield positions and even put in nine innings at second base.

The problem was that Pepito was not producing at the plate the way that a DH needs to and the Rangers had three regular outfielders. To add to his woes, the Rangers fired manager Billy Martin in late July. With his patron gone and the team struggling Cesar was in trouble. On August 31st Texas sold him to Oakland. He would play through the end of 1976 in the Majors before hanging up the spikes.
Posted by Spiff at 7:39 PM

How about that spanking the Rangers gave the Sox last night!?