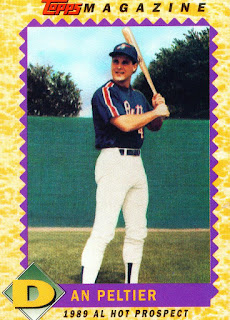 One of the things about minor league cards is where they sometimes surface. Take this 1990 Topps Magazine card of Dan Peltier. I can't remember which trade I picked it up in but I never had a Topps Magazine subscription so I know I traded for it. The interesting thing about this card is that Peltier is listed as playing for the Butte Copper Kings, not the Rangers. The Rangers aren't even mentioned until several lines into the write-up on the back.

Even though he's pictured in his Copper Kings uniform, Dan was no longer in Rookie Ball by the time the card came out. After an astounding 1989 season he was promoted straight to Double A Tulsa for the 1990 season.

With Tulsa Peltier's numbers came back to earth. He played in 117 games for the Drillers and made 497 trips to the plate. He posted a .279 batting average and a .345 on-base percentage. He also hit 20 doubles, four triples, and 11 home runs. Not bad numbers but a definite dip from the previous season when he took batting practice off opposing pitchers.

In 110 games in the field Dan played outfield and posted a .958 fielding percentage.

Well, the Rangers super prospect was certainly struggling with the transition from Rookie Ball to Double A. Only time would tell if he would be able to make the adjustment and continue to climb the minor league ladder.
Posted by Spiff at 12:12 PM