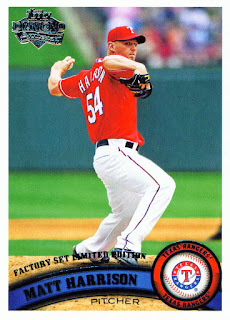 My family doesn't have cable, satellite, or any other type of paid TV service. Most of the time I could care less. During baseball season though I occasionally get the itch to see the Rangers play. Not being in Texas that can be a bit difficult.

Enter Mark, Royals fan to the bone. Mark's a good guy. He also has Direct TV. With a sample subscription to extra innings for this week only. Cue the phone. Cue Mark asking if I would like to come see the Rangers play the Twins last night. What kind of question is that? I course I would. Off to Mark's house.

The last time Mark invited me over to watch the Rangers play was last year. Texas got pounded by Houston. Houston! With the Rangers' history in Minnesota I was hoping that the game would at least be close. A win was almost too much to hope for.

Enter Matt Harrison, shown here on card 432 of the 2011 Topps 60th Anniversary Factory Set. After a Minnesota run in the second, Harry shut the Twins down. He left the game after the eighth with a 4-1 lead. In comes Alexi Ogando and struggles through the ninth but allows no runs.

Good to actually see a win. Radio is great but occasionally it's nice to watch it happen on TV. Thanks for the invite Mark! Thanks for the win Matt!
Posted by Spiff at 9:56 PM