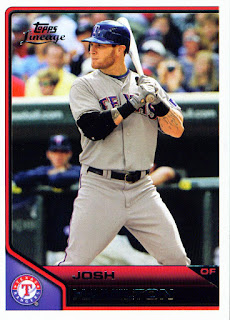 Well, the Rangers moved to 8-2 last night with a 4-3 win over the Twins in Minnesota. Notable game for several reasons.

Josh Hamilton, shown here on card 184 of the 2011 Topps Lineage set, has been pretty hot this season. Last night he was clutch as well. He hammered a two run shot to put Texas up in the eighth. Nice.

Joe Nathan got the save. Encouraging to see that. I think he still bears watching but he seemed to put a few more of the pieces in place this weekend.

Neftali Feliz is human. He held the Twins scoreless through four but then they got to him. After thirteen scoreless innings as a starter he finally gave up a run. Well, three runs. Left the game in the hole but was rescued by Hamilton and the bullpen. Going to be interesting to see his confidence level next time out.

Sweep! First time in Minnesota since 1999. Very good and hopefully a sign of things to come as the team heads to Boston and Detroit.
Posted by Spiff at 5:26 PM