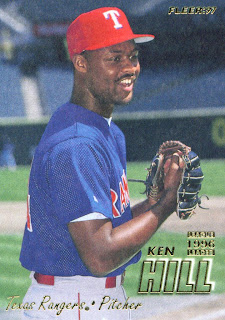 Night off last night. Time to take another look at one of the Top 50 lists.

T.R. is right. 1996 was Hill's career year. He tossed the most innings that he ever would in a season and made the most starts he ever would. Seven of those starts ended up being complete games and three of those were shutouts. Both were career highs. Ken also experienced a career high in strikeouts with 170.

That performance made Hill, shown here on card 226 of the 1997 Fleer set, the ace of the Texas starting staff. T.R. is right though, the moment would be brief. In 1997 his ERA would climb and his innings pitched and strikeouts would slip. That would be enough for Texas to send him to Anaheim midway through the season.
Posted by Spiff at 10:00 PM