End of the line. 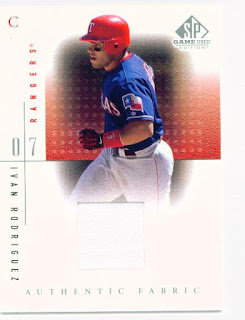 Today marks the end of an era. One of the best catchers to ever play the game has announced his retirement. After 21 seasons in the Major Leagues, Ivan Rodriguez is hanging up the spikes and mask.

Pudge, shown here on card IR of the 2001 SP Game-Used Edition Authentic Fabric set, broke into the Majors with Texas in 1991. For 12 seasons he thrilled Rangers fans with his bat and defense. The cannon arm snuffed out runners about as fast as they could get on base.

Following the 2002 season Texas was foolish enough let Ivan walk. Florida signed him and he helped lead the team to a World Series title in 2003. On to Detroit in 2004 where he played for almost five seasons before being traded to the Yankees. The 2009 season saw I-Rod starting the season with Houston and then making a triumphant homecoming with the Rangers at the trading deadline. Two seasons with the Washington Nationals finished off the run.

I am a little torn to see Pudge retire. Several years ago I would have figured he was a lock for the Hall of Fame. Now I am not sure. His inability to conclusively deny steroid use could block any bid he might make for a plaque. That would be a tragedy. Aside from Bench, Ivan is easily the best catcher to play the game in recent history. For him to allow the specter of steroid use to loom over his career truly makes no sense.
Posted by Spiff at 9:07 PM

Thanks to Canseco, everyone of the Rangers from that time is suspect, but I think he'll be inducted, just not on the first ballot which he would deserve otherwise.