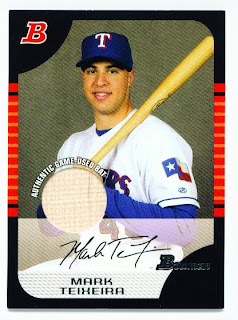 So the Angels stayed alive tonight, but just barely, to avoid elimination in the ALCS. In spite of Mark Teixeira's bashing, the Halos are sending the series back to New York.

Money Man, seen here on card number 43 of the 2005 Bowman game-used set, went 2-for-5 with three RBI. (Had to post a Yankee card since I don't have either an auto or game-used card of an Angels player.) His RBI came at a critical time and helped spark the Yankee's six run seventh inning.

The Angels were able to come back though against The Empire's bullpen after knocking out starter A.J. Burnett. That means that game six will be played in New York on Saturday. I would like to see Anaheim pull off a humiliating defeat of the Yankees in the series but I am doubting that it will happen. Two straight in The Belly of the Beast in October is a tall order indeed.
Posted by Spiff at 10:40 PM

It's something, at least.

I think the way CC is pitching, he should start game 6, on regular rest. This will make sure he is available for game 1 of the world series and if they lose pettite can handle game 7