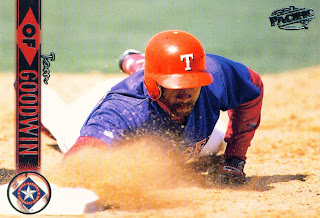 I like this card, number 424 in the 1999 Pacific set. Kind of surprising really. Pacific never did much for me and I didn't even notice them leaving the baseball card scene. I didn't like the red uniforms, either the first time around or this time. I only have a vague recollection of Tommy Goodwin with the team.

In spite of all of this, I like the card. I like the hustle and the headfirst slide. The dirt kicking up ahead of Tommy as he grabs the bag. The concentrated set of the mouth.

I would like to imagine he is swiping second or third but this is likely taking place at first as he dives back in under a pick-off attempt. Either way, it is a nice shot. Even if you can't see Tommy's eyes.
Posted by Spiff at 8:32 PM