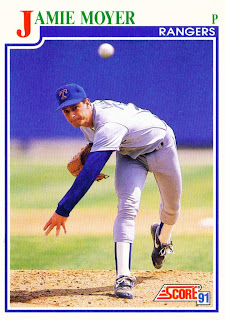 In honor of the Phillies' 6-1 victory in game one of the World Series I am posting Jamie Moyer's 1991 Score card, number 437 in the set. I know Jamie is out hurt for the Series but he is the only former Ranger represented on the Phils that I am aware of.*

Anyway, good game guys. Awesome pitching performance by Cliff Lee and the offense never said die either. Gotta tighten up that ninth inning defense a little though or the Empire will strike back.

All the same, it did my heart good to see the Yanks trounced in their home park. Perhaps Philly can pull it off.

*Thanks to reader Raymond, I have been corrected. There are at least two other former Rangers with the Phillies. One is Chan Ho Park whom I have previously mentioned in connection with this post-season. Oops.
Posted by Spiff at 10:44 PM

Chan Ho Park and Scott Eyre are with the Phils.

Thanks for the correction. I don't know how I missed Park as I have used some of his cards previously in this post-season.